A Tim Hortons cafe/restaurant and drive-thru at Broadstairs Retail Park which is expected to create 30 full-time and 40 part-time jobs is likely to be approved by Thanet Council.

The Canadian Food Chain, which started in Ontario in 1964, began expanding to the UK in 2017. It currently has 29 locations open with more expected to open across the UK with the nearest location in Thanet currently in Thurrock.

The Thanet outlet would be the first in Kent and shares the same retail park as Tesco Extra, Currys/PC World, The Range and Wickes. The park will also be the new base for the Thanet covid vaccination team which is leaving Saga’s premises this weekend.

The chain offers food, including donuts, bagels, burgers, and pancakes, as well as a variety of coffees and cold drinks.

The proposal includes new road markings to reduce congestion, a paved seating area, a passageway, 22 parking spaces (including 2 disabled spaces), 3 motorcycle spaces and a sheltered bicycle rack. There is also a proposed footpath. 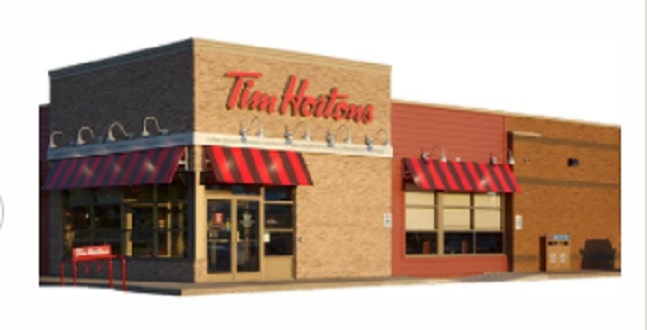 A planning application submitted to Thanet Council describes the business as follows: “Tim Hortons is a relatively new entrant to the UK market and can best be described as a chain of restaurants with a coffee and bakery offering.

“The brand was founded in 1964 in Hamilton, Ontario, Canada. It has since become Canada’s most loved brand with over 4,500 stores coast to coast. Known affectionately as “Timmy’s”, it is a place famous for its fresh coffee and baked goods and is visited by over 5.3 million Canadians every day.

“Tim Hortons opened its first UK store in 2017 and (at the time of writing) has 29 units across the four UK countries, with more to open soon. Its current target is to expand its drive-thru model across the UK, including on the app site.

“Tim Hortons’ offer is different from that offered by McDonalds, KFC and Burger King and is comparable to that offered by café operators such as Costa or Starbucks, with a substantial part of the offer comprising hot and cold drinks and bakery products. merchandise, including a huge selection of donuts. The hot food offering includes paninis and ‘fondants’ as well as hot sandwiches and wraps, again similar to those at other cafes.

“There is also an emphasis on the ambience of the dining facilities, encouraging customers to dine.” 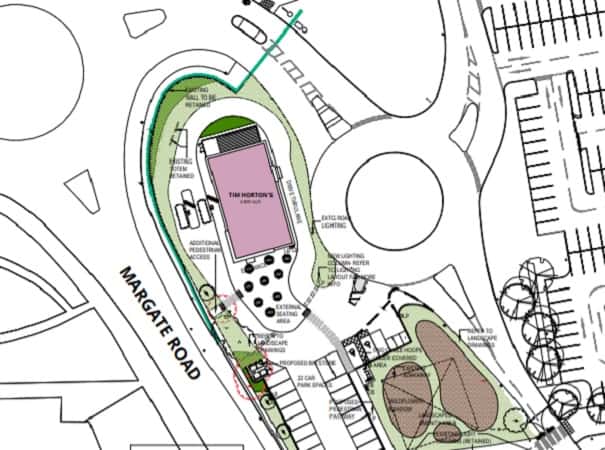 The Broadstairs site would be 260 square meters (2,800 sq ft) with its length approximately parallel to Margate Road. Inside, the cafe/restaurant could accommodate around 96 customers, as well as a waiting and queuing area, customer toilets and a back of house/kitchen area.

It would have both drive-through and pedestrian access and would be open (for commerce) from 6 a.m. to 11 p.m. seven days a week.

Planning officers recommend approval in a report to members of the planning committee, saying, “The proposal will result in the loss of open space, as well as the loss of a small number of trees, but the plan of landscaping submitted shows that new trees/hedges/shrubs planting is proposed, as well as the establishment of a wildflower meadow.

“Benches are offered along the existing south footpath which will allow these spaces to be enjoyed while providing additional seating in the town center between Broadstairs Retail Park and Westwood Cross.

“While the loss of the open space and 5 trees will result in environmental damage, the proposed landscaping, which incorporates the planting of 10 trees, is considered, overall, to enhance the biodiversity and landscape appearance of the site.

“Overall, it is considered that the economic benefits to the town center of erecting this additional catering unit are considered to outweigh the limited environmental damage, and as such, members are recommended to approve the request, subject to safeguard conditions and the legal signature of an agreement securing the charging areas for electric vehicles.

The application will be discussed on January 19. The planning meeting begins at 7 p.m.